Though ignorant of its overwhelming beauty and truth, enough of this book's value was apparent from reviews that I would have read it many years before I did had it not been for one fatal word in its subtitle: "gay." Whether its deployment is a genuine detraction from the author's otherwise profound understanding and appreciation of the beauty and ethos of Greek love or whether it is a sad concession to the social correctness currently necessary for commercial success, unfortunately it matters.

However, let me first acknowledge this book's virtues, all that qualify it as an extraordinarily beautiful work of the most profound intellectual and aesthetic importance. Despite all one might fear about a work characterising an ancient phenomenon by an anachronistically extremely modern and different one, the contents are entirely faithful in spirit and beauty to the euphoria and extreme human success enabled for tragically too few centuries by an unrivaledly beneficent but now tragically misunderstood form of love. It is no mean feat to achieve this, when not only the spirit of our age militates against it, but the original sources are often profoundly contradictory, their reconciliation requiring considerable understanding and insight. Mr.Calimach has resolved all this most convincingly, for which reasons his book can and should be enjoyed by all.

To try to get an idea why calling these myths gay is so critically misrepresentative, let us imagine what would happen if Zeus were to appear today and hear Mr. Calimach call him gay. Always concerned about mortal impiety towards the gods, he would naturally make enquiries as to what gay meant. He would be merely baffled by the notion he had been born unchangeably fixed in an attraction to males that made him one of a distinct minority, knowing as he did that all that mattered about the mortals that caught his eye was their beauty and not whether they were women or boys. Confusion would change to revulsion though when he heard gays were turned on by men. Fury would begin to arise when he heard most gays joining the cacophany of voices rabidly denouncing the love of boys, and it would explode when he heard them fiercely asserting that gay relationships were equal and that by imputation he was believed to swap roles when in bed with Ganymede. Then thunderbolts would be unleashed and I fear Mr. Calimach would find no place safe to hide. No amount of pleading the undoubted merits of his book would save him in even the depths of Hades, and he would soon find himself eternally and unfairly consigned to the terrible chamber therein named Tartaros. 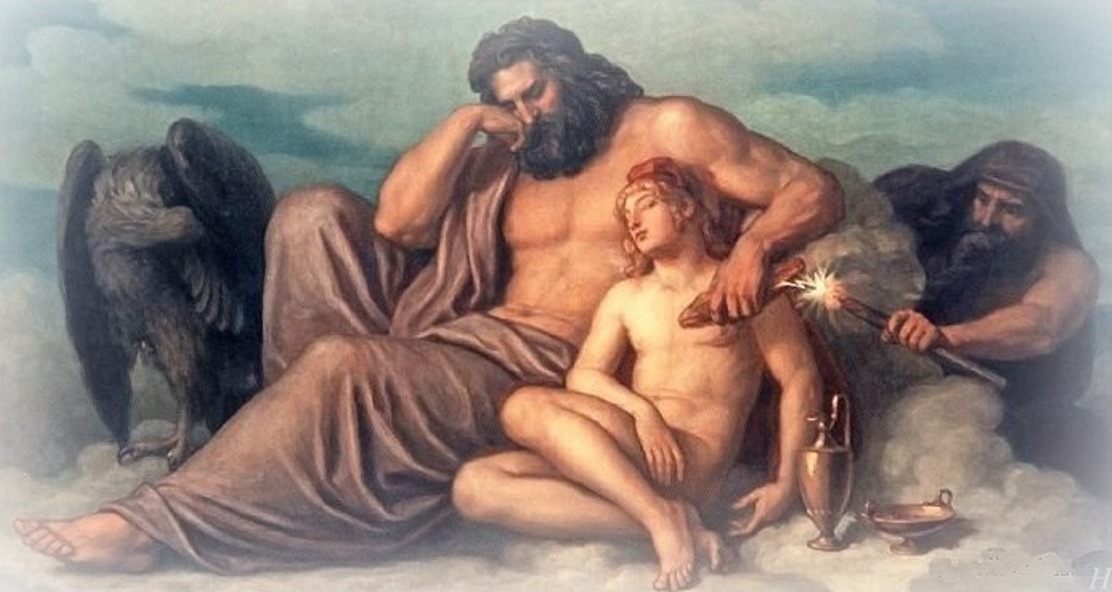 Zeus and Ganymede (Theft of Fire) by Christian Griepenkerl, 1878